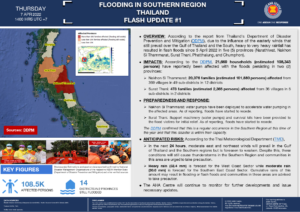 OVERVIEW: According to the report from Thailand’s Department of Disaster Prevention and Mitigation (DDPM), due to the influence of the easterly winds that still prevail over the Gulf of Thailand and the South, heavy to very heavy rainfall has resulted in flash floods since 5 April 2022 in five (5) provinces (Narathiwat, Nakhon Si Thammarat, Surat Thani, Phatthalung, and Chumphon).

IMPACTS: According to the DDPM, 21,669 households (estimated 108,345 persons) have reportedly been affected with the floods persisting in two (2) provinces:

The DDPM confirmed that this is a regular occurrence in the Southern Region at this time of the year and that this disaster is within their capacity.

ANTICIPATED RISKS: According to the Thai Meteorological Department (TMD),

The AHA Centre will continue to monitor and issue necessary updates once more information from official sources becomes available.