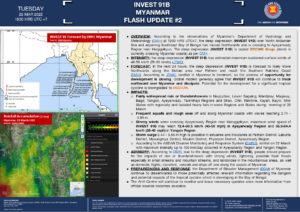 OVERVIEW: According to the observations of Myanmar’s Department of Hydrology and Meteorology (DMH) at 1200 HRS UTC+7, the deep depression (INVEST 91B) over North Andaman Sea and adjoining Southeast Bay of Bengal has moved Northwards and is crossing to Ayeyarwady Region near Haiggyikyun. The deep depression (INVEST 91B) is coded BROWN Stage (storm is currently crossing Myanmar coasts) as per DMH.

FORECAST: In the next 24 hours, the deep depression (INVEST 91B) is forecast to likely move Northwards along the Deltaic area near Pathein and reach the Southern Rakhine Coast (DMH). According to JTWC, landfall in Myanmar is imminent, so the window of opportunity for development is closing. Global models generally agree that INVEST 91B will continue to track northward over Myanmar and dissipate. Potential for the development for a significant tropical cyclone is downgraded to MEDIUM.

ADVISORY: According to DMH, due to the deep depression (INVEST 91B), people should prepare for the impacts of rain or thundershowers with strong winds, lightning, possible flash floods especially in small streams and mountain streams, and landslides in the mountainous areas, as well as domestic flights, travellers, vessels and ships off and along the coasts of Myanmar.

PREPAREDNESS AND RESPONSE: the Department of Disaster Management (DDM) of Myanmar continue to disseminated to those potentially affected relevant information regarding the dangers and potential impacts of the tropical cyclone which is developing in the Bay of Bengal.

The AHA Centre will continue to monitor and issue necessary updates once more information from official sources becomes available.