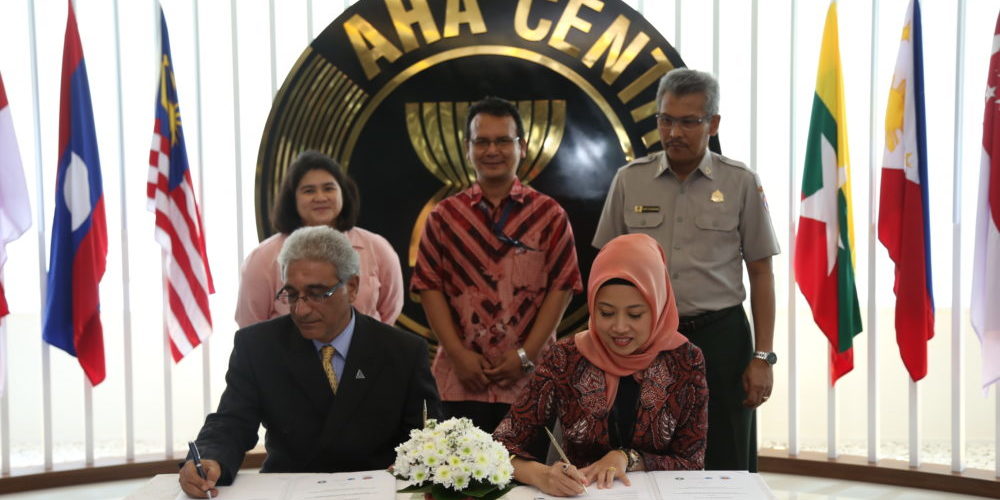 The ASEAN Coordinating Centre for Humanitarian Assistance on disaster management (the AHA Centre) thrives on inclusive partnership to realise the vision of One ASEAN One Response. Under the guidance of the ASEAN Committee on Disaster Management (ACDM), the AHA Centre signed a Memorandum of Intent (MoI) with the Hawaiian-based, Pacific Disaster Center (PDC).  The MoI signing is intended to reiterate the mutual partnership between the two organisations on creating a resilient ASEAN.

The US Government has been one of the few partners who has been supporting the AHA Centre since the early days, even before the AHA Centre was established five years ago. When the AHA Centre was being established, the US Government through the US PROGRESS and with the technical expertise of PDC, helped put in place the Disaster Monitoring and Response System or DMRS, adapted from PDC-owned invention, i.e. the Disaster Aware. This innovation remains one of a kind and unique since it provides a common operating platform to monitor, track and prepare for disasters.

“The ACDM is enthused over the new partnership that the AHA Centre and PDC will embark today. It is our greatest hope that the signing of Memorandum of Intent will reiterate the significant partnership between ASEAN and the US Government. We look forward to the eminent partnership and may we realise further the vision of One ASEAN One Response,” said Mr Dody Ruswandi whom also represent the ACDM and Governing Board of the AHA Centre.

Meanwhile, Adelina said “The PDC has also been one of those partners who have been consistently involved in the development of the ASEAN Agreement on Disaster Management and Emergency Response (AADMER) work programmes and its implementation.” The PDC has been involved with the work of the ACDM since the early days, back in mid-2004, before the Indian Ocean Tsunami and before the ACDM embarked on the AADMER. The PDC helped in the development of the ASEAN Disaster Information Sharing and Communication Network (ASEAN DISCNet), which was the genesis of the DMRS.

For more information on PDC and its activities click http://www.pdc.org/