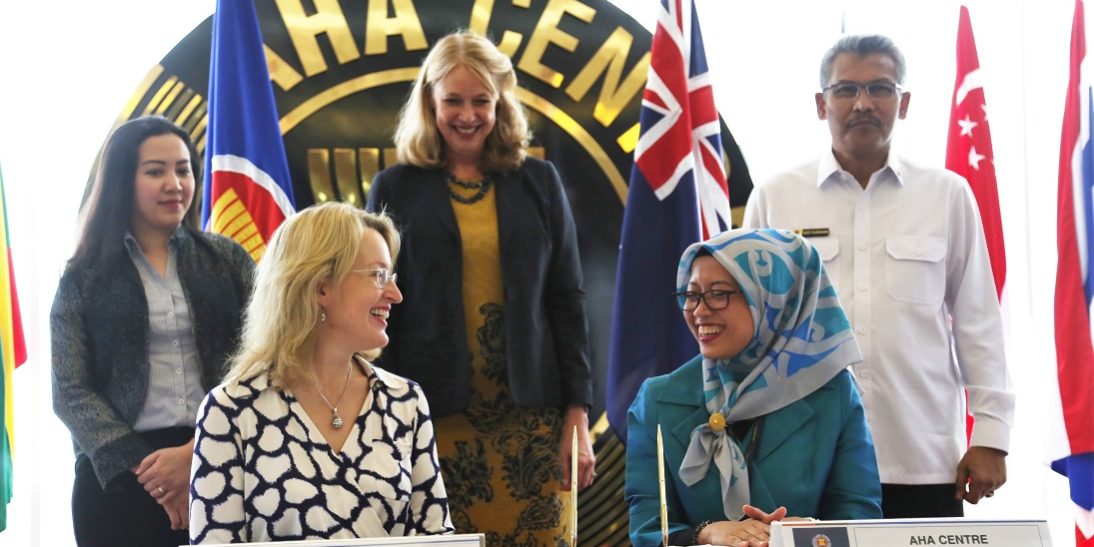 The ASEAN Coordinating Centre for Humanitarian Assistance on disaster management (the AHA Centre) and the Australian Department of Foreign Affairs and Trade (DFAT) agree to reaffirm their commitment to continue working together in the area of disaster management. Thereby, a Memorandum of Intent (MoI) was signed today at the AHA Centre, formalising the appointment of Mr. Wojciech Dabrowka as the Disaster Response Coordination Specialist under the Australian Civilian Deployment initiative.

Mr. Dabrowka is responsible to assist the AHA Centre in coming up with a coordination mechanism in response to disasters, following the mandate given by the ASEAN Leaders after they signed the “ASEAN Declaration on One ASEAN One Response: ASEAN Responding to Disasters as One in the Region and Outside the Region” last September 2016 in Vientiane, Lao PDR. The signing ceremony was conducted by Ms Adelina Kamal, Executive Director of the AHA Centre and Ms Jane Duke, Australian Ambassador to ASEAN. It was witnessed by Mr Dody Ruswandi, Secretary-General of Indonesia’s National Disaster Management Authority (BNPB), Ms Bronwyn Robbins, the Australian Deputy Head of Mission to ASEAN, and Ms Intani Kusuma, Technical Officer of the Disaster Management and Humanitarian Assistance at the ASEAN Secretariat.

Mr Ruswandi expressed that the support of Australian Government was vital during the establishment phase of AHA Centre in 2011. At the same time, the bilateral partnership between Australia and Indonesia also fortifies the disaster preparedness in South East Asian region. For instance, through the establishment of Australia-Indonesia Facility for Disaster Reduction in 2010 and the development of the East Asia Summit Rapid Disaster Response Toolkit launched in 2015.

Meanwhile, Ms Adelina Kamal said, “The continuous support from the Australian Government will enhance our capacity in implementing a broader mandate that is to respond to disasters within and outside ASEAN region, including by utilising the East Asia Summit Rapid Disaster Response Toolkit. Therefore, I am pleased to extend our partnerships at this timely and critical juncture and looking forward to further strengthening disaster resilience in our region.”

DFAT is based in Canberra and aims to promote Australia’s contribution in maintaining global stability and supporting economic growth. One of its missions is the Australian Civilian Corps (ACC), which was launched in 2011 to bridge the gap between emergency relief and long-term recovery programmes. Since its establishment, the ACC has facilitated over 180 deployments in over 20 countries, the majority in Asia and the Pacific. For more information on DFAT and its missions, click www.dfat.gov.au.