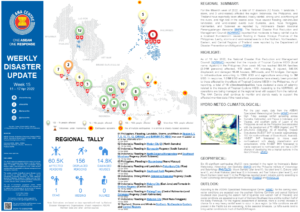 For the fifteenth week of 2022, a total of 17 disasters (12 floods, 1 landslide, 1 storm, and 3 wind-related) affected the region. Indonesia, the Philippines, and Thailand have reportedly been affected. Heavy rainfall, strong wind, overflowing of the rivers, and high tide in the coastal area  have caused flooding, rain-induced landslides, and wind-related events over Sumatra, Java, Nusa Tenggara, Kalimantan, and Sulawesi as reported by Indonesia’s Badan Nasional Penanggulangan Bencana (BNPB). The National Disaster Risk Reduction and Management Council (NDRRMC) reported that moderate to heavy rainfall due to a localised thunderstorm caused flooding in Nueva Vizcaya Province of the Philippines. Lastly, storms and wind-related events in the Northern, Northeastern, Eastern, and Central Regions of Thailand were reported by the Department of Disaster Prevention and Mitigation (DDPM).

As of 18 Apr 2022, the National Disaster Risk Reduction and Management Council (NDRRMC) reported that the impacts of Tropical Cyclone MEGI (local name: Agaton) in the Philippines (from week 14) has reached 584.1K families (2.01M persons) affected, 172 death, 110 missing, 8 injured, 346.6K displaced, and damaged 10.4K houses, 309 roads, and 15 bridges. Damages to infrastructure amounting to 139K USD and agriculture amounting to 5M USD. In response, 1.01M USD worth of assistance have already been provided to those affected by the effects of Tropical Cyclone MEGI in the Philippines. As of reporting, a total of 16 cities/municipalities have declared a state of calamity related to the impacts of Tropical Cyclone MEGI. According to the NDRRMC, all operations are being managed at the regional level with support from the national. The AHA Centre shall continue to monitor and stands ready to support the affected member state if the need arises.

For the past week, data from the ASEAN Specialised Meteorological Centre (ASMC) showed high 7-day average rainfall spreading across Sumatra, Kalimantan, and Papua in Indonesia; and Visayas, and southern parts of Luzon of the Philippines as well as the Philippine Sea associated with the development of TC MEGI (Agaton) and TC MALAKAS (Basyang). As of reporting, Tropical Disturbance INVEST 94P is located approximately 150 Km north-northwest of Gove Airport, Australia. INVEST 94P forecasted to move west-northwestward with steady intensification and consolidation, while INVEST 94W forecasted to  tracks westward to northwestward and has a LOW chance of developing into a tropical cyclone in the next 24 hours. (JTWC).

According to the ASEAN Specialised Meteorological Centre (ASMC), for the coming week, wetter conditions are expected over the southern Maritime Continent and central Mainland Southeast Asia (covering the eastern half of Myanmar and western half of Thailand); and cooler conditions are expected over much of Mainland Southeast Asia and the northern half of the Malay Peninsula. For the regional assessment of extremes, there is a small increase in chance for a very heavy rainfall event to occur in Java region. La Niña conditions are still present in the Pacific but are weakening. At the seasonal timescale, La Niña events tend to bring wetter conditions to much of the ASEAN region.