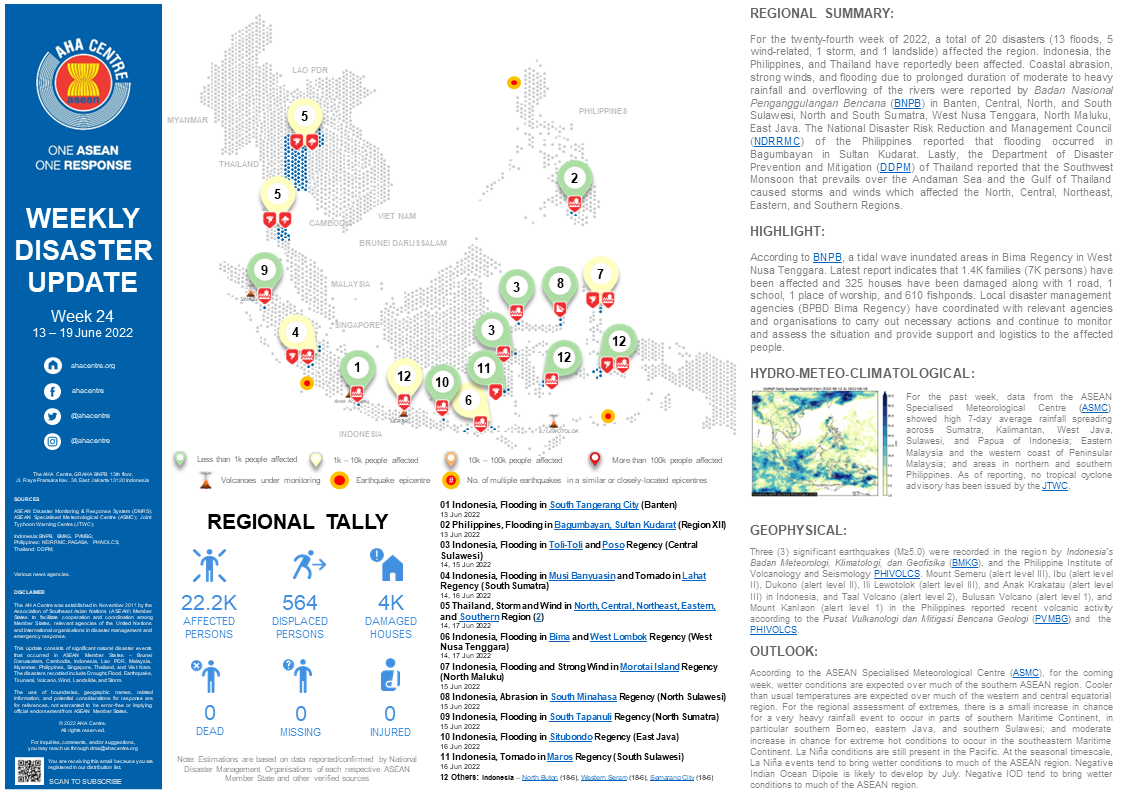 For the twenty-fourth week of 2022, a total of 20 disasters (13 floods, 5 wind-related, 1 storm, and 1 landslide) affected the region. Indonesia, the Philippines, and Thailand have reportedly been affected. Coastal abrasion, strong winds, and flooding due to prolonged duration of moderate to heavy rainfall and overflowing of the rivers were reported by Badan Nasional Penganggulangan Bencana (BNPB) in Banten, Central, North, and South Sulawesi, North and South Sumatra, West Nusa Tenggara, North Maluku, East Java. The National Disaster Risk Reduction and Management Council (NDRRMC) of the Philippines reported that flooding occurred in Bagumbayan in Sultan Kudarat. Lastly, the Department of Disaster Prevention and Mitigation (DDPM) of Thailand reported that the Southwest Monsoon that prevails over the Andaman Sea and the Gulf of Thailand caused storms and winds which affected the North, Central, Northeast, Eastern, and Southern Regions.

According to BNPB, a tidal wave inundated areas in Bima Regency in West Nusa Tenggara. Latest report indicates that 1.4K families (7K persons) have been affected and 325 houses have been damaged along with 1 road, 1 school, 1 place of worship, and 610 fishponds. Local disaster management agencies (BPBD Bima Regency) have coordinated with relevant agencies and organisations to carry out necessary actions and continue to monitor and assess the situation and provide support and logistics to the affected people.

For the past week, data from the ASEAN Specialised Meteorological Centre (ASMC) showed high 7-day average rainfall spreading across Sumatra, Kalimantan, West Java, Sulawesi, and Papua of Indonesia; Eastern Malaysia and the western coast of Peninsular Malaysia; and areas in northern and southern Philippines. As of reporting, no tropical cyclone advisory has been issued by the JTWC.