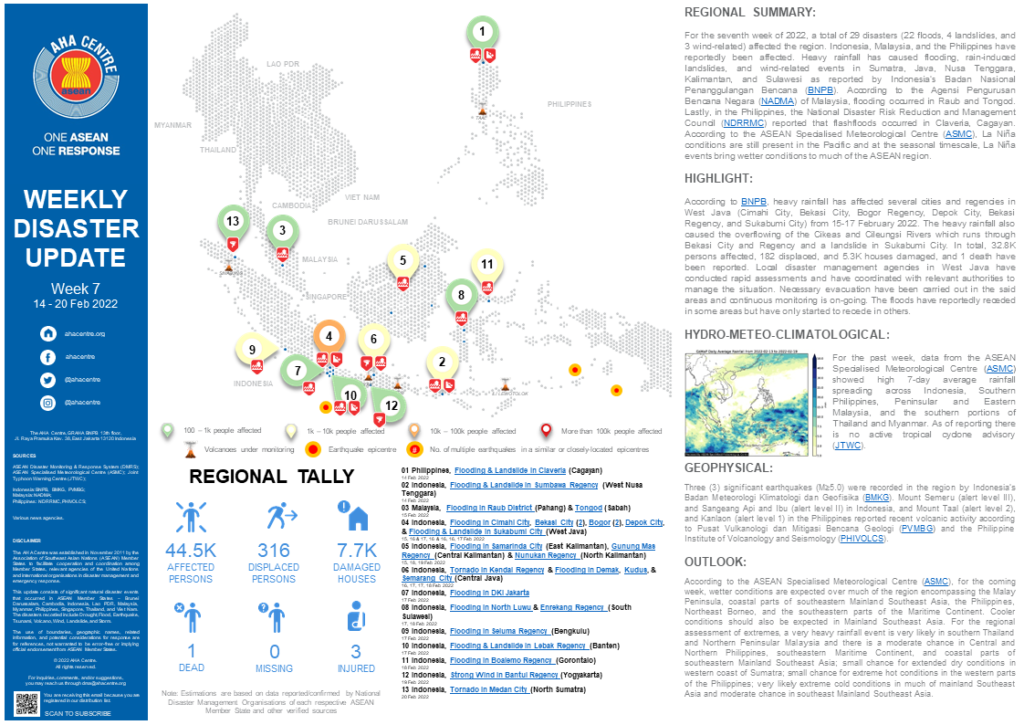 For the seventh week of 2022, a total of 29 disasters (22 floods, 4 landslides, and 3 wind-related) affected the region. Indonesia, Malaysia, and the Philippines have reportedly been affected. Heavy rainfall has caused flooding, rain-induced landslides, and wind-related events in Sumatra, Java, Nusa Tenggara, Kalimantan, and Sulawesi as reported by Indonesia’s Badan Nasional Penanggulangan Bencana (BNPB). According to the Agensi Pengurusan Bencana Negara (NADMA) of Malaysia, flooding occurred in Raub and Tongod. Lastly, in the Philippines, the National Disaster Risk Reduction and Management Council (NDRRMC) reported that flashfloods occurred in Claveria, Cagayan. According to the ASEAN Specialised Meteorological Centre (ASMC), La Niña conditions are still present in the Pacific and at the seasonal timescale, La Niña events bring wetter conditions to much of the ASEAN region.

According to BNPB, heavy rainfall has affected several cities and regencies in West Java (Cimahi City, Bekasi City, Bogor Regency, Depok City, Bekasi Regency, and Sukabumi City) from 15-17 February 2022. The heavy rainfall also caused the overflowing of the Cikeas and Cileungsi Rivers which runs through Bekasi City and Regency and a landslide in Sukabumi City. In total, 32.8K persons affected, 182 displaced, and 5.3K houses damaged, and 1 death have been reported. Local disaster management agencies in West Java have conducted rapid assessments and have coordinated with relevant authorities to manage the situation. Necessary evacuation have been carried out in the said areas and continuous monitoring is on-going. The floods have reportedly receded in some areas but have only started to recede in others.

For the past week, data from the ASEAN Specialised Meteorological Centre (ASMC) showed high 7-day average rainfall spreading across Indonesia, Southern Philippines, Peninsular and Eastern Malaysia, and the southern portions of Thailand and Myanmar. As of reporting there is no active tropical cyclone advisory (JTWC).