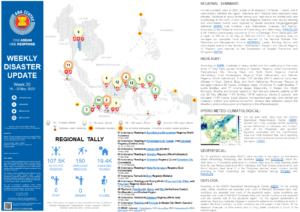 For the twentieth week of 2022, a total of 26 disasters (19 floods, 1 storm, and 6 wind-related) affected the region. Indonesia and Thailand have reportedly been affected. Moderate to heavy rainfall, strong wind, high tide in the coastal area, and overflowing of the rivers, a lake, and an irrigation channel have caused flooding and wind-related events were reported by Badan Nasional Penganggulangan Bencana (BNPB) over Sumatra, Java, Kalimantan, Sulawesi, and Maluku. According to the Philippine Institute of Vulcanology and Seismology (PHIVOLCS) a M6.1 tectonic earthquake occurred at 21 km of Calatagan Town (Batangas) with a depth of 128 km on 22 May at 1040 hrs UTC+7. As of reporting time, no damages nor casualties have been reported by the National Disaster Risk Reduction and Management Council (NDRRMC). Lastly, flooding, storms, and wind-related events in the Northern, Northeastern, Eastern, and Central Regions of Thailand were reported by the Department of Disaster Prevention and Mitigation (DDPM).

For the past week, data from the ASEAN Specialised Meteorological Centre (ASMC) showed high 7-day average rainfall spreading across Kalimantan in Indonesia; and northern Luzon of the Philippines; and southern Myanmar associated with the Low-Pressure Area over north Andaman Sea. As of reporting, there are no active tropical cyclone advisories in the region. (JTWC).