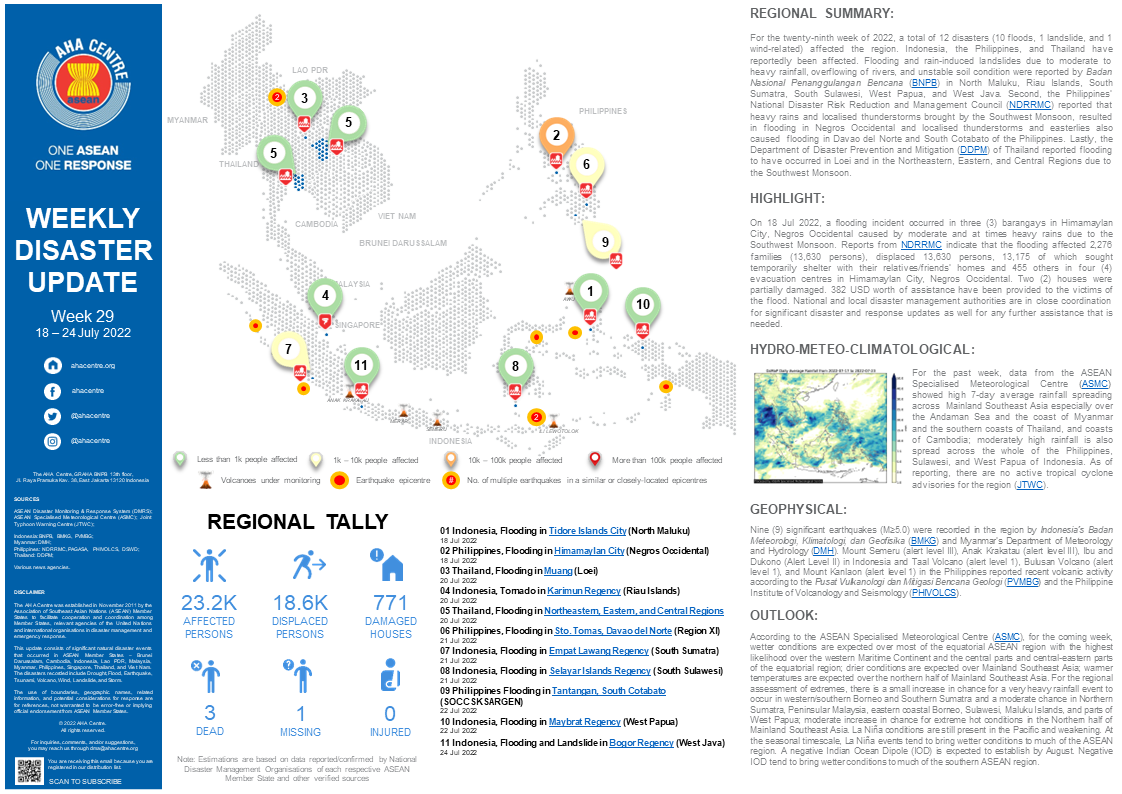 For the twenty-ninth week of 2022, a total of 12 disasters (10 floods, 1 landslide, and 1 wind-related) affected the region. Indonesia, the Philippines, and Thailand have reportedly been affected. Flooding and rain-induced landslides due to moderate to heavy rainfall, overflowing of rivers, and unstable soil condition were reported by Badan Nasional Penanggulangan Bencana (BNPB) in North Maluku, Riau Islands, South Sumatra, South Sulawesi, West Papua, and West Java. Second, the Philippines’ National Disaster Risk Reduction and Management Council (NDRRMC) reported that heavy rains and localised thunderstorms brought by the Southwest Monsoon, resulted in flooding in Negros Occidental and localised thunderstorms and easterlies also caused  flooding in Davao del Norte and South Cotabato of the Philippines. Lastly, the Department of Disaster Prevention and Mitigation (DDPM) of Thailand reported flooding to have occurred in Loei and in the Northeastern, Eastern, and Central Regions due to the Southwest Monsoon.

On 18 Jul 2022, a flooding incident occurred in three (3) barangays in Himamaylan City, Negros Occidental caused by moderate and at times heavy rains due to the Southwest Monsoon. Reports from NDRRMC indicate that the flooding affected 2,276 families (13,630 persons), displaced 13,630 persons, 13,175 of which sought temporarily shelter with their relatives/friends’ homes and 455 others in four (4) evacuation centres in Himamaylan City, Negros Occidental. Two (2) houses were partially damaged. 382 USD worth of assistance have been provided to the victims of the flood. National and local disaster management authorities are in close coordination for significant disaster and response updates as well for any further assistance that is needed.

For the past week, data from the ASEAN Specialised Meteorological Centre (ASMC) showed high 7-day average rainfall spreading across  Mainland Southeast Asia especially over the Andaman Sea and the coast of Myanmar and the southern coasts of Thailand, and coasts of Cambodia; moderately high rainfall is also spread across the whole of the Philippines, Sulawesi, and West Papua of Indonesia. As of reporting, there are no active tropical cyclone advisories for the region (JTWC).

According to the ASEAN Specialised Meteorological Centre (ASMC), for the coming week, wetter conditions are expected over most of the equatorial ASEAN region with the highest likelihood over the western Maritime Continent and the central parts and central-eastern parts of the equatorial region; drier conditions are expected over Mainland Southeast Asia; warmer temperatures are expected over the northern half of Mainland Southeast Asia. For the regional assessment of extremes, there is a small increase in chance for a very heavy rainfall event to occur in western/southern Borneo and Southern Sumatra and a moderate chance in Northern Sumatra, Peninsular Malaysia, eastern coastal Borneo, Sulawesi, Maluku Islands, and parts of West Papua; moderate increase in chance for extreme hot conditions in the Northern half of Mainland Southeast Asia. La Niña conditions are still present in the Pacific and weakening. At the seasonal timescale, La Niña events tend to bring wetter conditions to much of the ASEAN region. A negative Indian Ocean Dipole (IOD) is expected to establish by August. Negative IOD tend to bring wetter conditions to much of the southern ASEAN region.