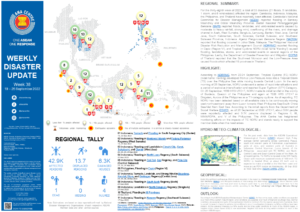 According to NDRRMC, from 22-24 September, Tropical Cyclone (TC) NORU (local name: Karding) developed from a Low-Pressure Area into a Tropical Storm (TS) over the Philippine Sea while moving towards Central Luzon. In the early morning of 25 September, NORU underwent a series of rapid intensifications and a period of explosive intensification and reached Super Typhoon (STY) Category. On 25 September, 1630 HRS UTC+7, NORU made its initial landfall in the vicinity of Burdeos, Quezon of the Philippines and again at 1920 HRS UTC+7 in Dingalan, Aurora of the Philippines as a TY-category cyclone. As of reporting, TC NORU has been detected based on all available data to be continuously moving west-northwestward away from Luzon towards West Philippine Sea-South China Sea-Viet Nam East Sea. According to the initial reports from the Department of Social Welfare (DSWD), as of 26 September at 0500 UTC+7, about 9.8K people were reportedly affected and 9.7K persons displaced in Regions II, III, MIMAROPA, and V of the Philippines. The AHA Centre has heightened monitoring efforts on the impacts of TC NORU and stands ready to support the member state when the need arises.

For the past week, data from the ASEAN Specialised Meteorological Centre (ASMC) showed high 7-day average rainfall spreading across Cambodia; Papua, south and western parts of Kalimantan, southwestern parts of Java, and western parts of Sumatra in Indonesia; Central Myanmar; Luzon Islands of the Philippines  associated with TC NORU; and North-Central Coast and South-Central Coast of Viet Nam. As of reporting time, TC NORU is located in the NW Pacific Ocean with maximum sustained winds of 148 km/h. TC NORU is headed West at about 26 km/h and is expected to make a landfall at the Viet Nam coast and move to Lao PDR border on Wednesday, 28 Sep 2022 at 15:00 local time (ASEAN DMRS, JTWC).