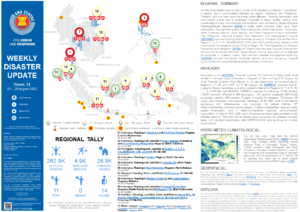 According to the NDRRMC, Tropical Cyclone MA-ON (Florita) made initial landfall in the east coast of Isabela or Cagayan on the morning of 23 August. At most Tropical Cyclone Wind Signal no. 2 was raised over some provinces in Regions I, II, III, and CAR. As of 29 August, the NDRRMC reported that 91 incidents (floods, landslides and other-related incidents) in Regions 6, 7, 8, 9, 10, 11, 12, CARAGA, and BARMM. NDRRMC reported the following: 31.9K families (129.8K persons) affected in 486 barangays, 1.6K persons displaced (286 inside evacuation centres, 993 outside), 3 dead, 4 injured; for damages, 72 houses, 45 roads, and 14 bridges were reportedly damaged. 10.3K USD worth of damage to agriculture and infrastructure was reported; for critical lifelines, 57 cities/municipalities reported power outage, 2 cities/municipalities reported water supply interruption, and 1 cities/municipalities reported communication interruption. A total of 154K USD worth of assistance have been provided to the affected persons. The AHA Centre stands ready to support the affected member state, is in constant coordination with NDRRMC-OCD, and continues to monitor the situation.

For the past week, data from the ASEAN Specialised Meteorological Centre (ASMC) showed high 7-day average rainfall spreading across southern Parts of Cambodia; Papua, Maluku, Central Sulawesi, West Kalimantan, and North Sumatra in Indonesia; Northern Myanmar; Luzon of the Philippines and Northeastern parts of Viet Nam associated with the development of TC MA-ON. As of reporting time, there are no active tropical cyclone advisories for the ASEAN region (JTWC).