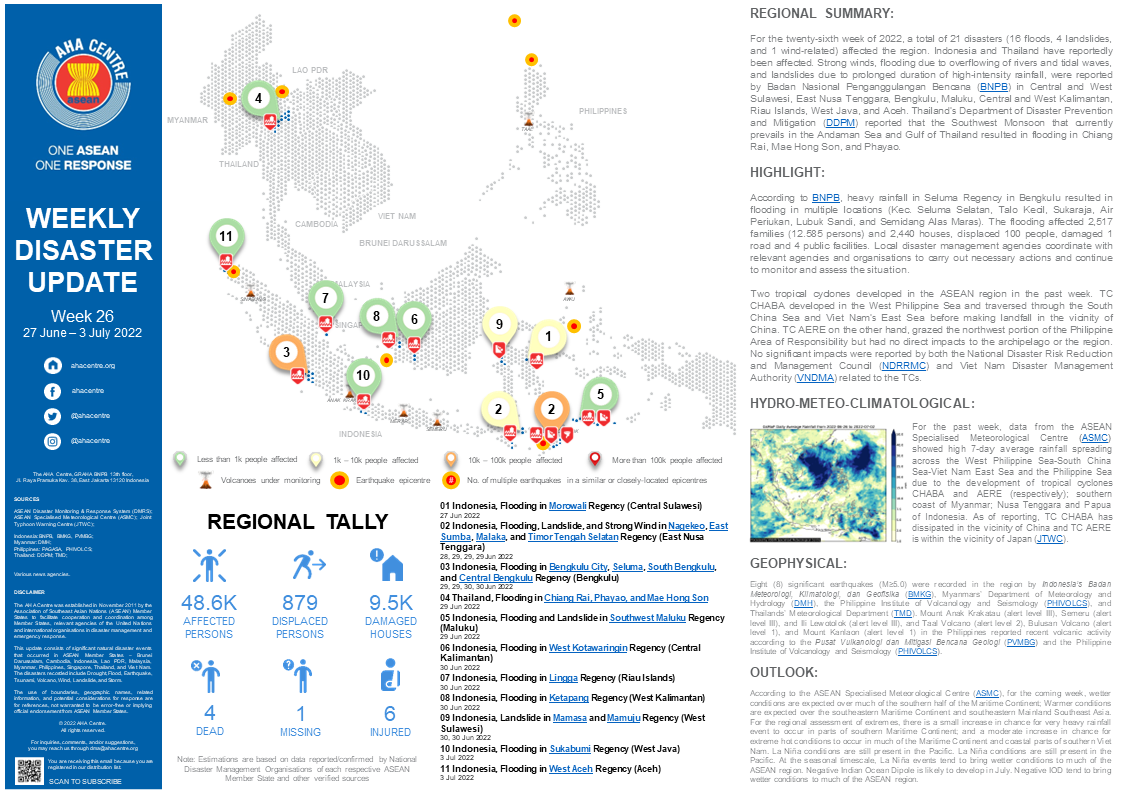 For the twenty-sixth week of 2022, a total of 21 disasters (16 floods, 4 landslides, and 1 wind-related) affected the region. Indonesia and Thailand have reportedly been affected. Strong winds, flooding due to overflowing of rivers and tidal waves, and landslides due to prolonged duration of high-intensity rainfall, were reported by Badan Nasional Penganggulangan Bencana (BNPB) in Central and West Sulawesi, East Nusa Tenggara, Bengkulu, Maluku, Central and West Kalimantan, Riau Islands, West Java, and Aceh. Thailand’s Department of Disaster Prevention and Mitigation (DDPM) reported that the Southwest Monsoon that currently prevails in the Andaman Sea and Gulf of Thailand resulted in flooding in Chiang Rai, Mae Hong Son, and Phayao.

Two tropical cyclones developed in the ASEAN region in the past week. TC CHABA developed in the West Philippine Sea and traversed through the South China Sea and Viet Nam’s East Sea before making landfall in the vicinity of China. TC AERE on the other hand, grazed the northwest portion of the Philippine Area of Responsibility but had no direct impacts to the archipelago or the region. No significant impacts were reported by both the National Disaster Risk Reduction and Management Council (NDRRMC) and Viet Nam Disaster Management Authority (VNDMA) related to the TCs.

For the past week, data from the ASEAN Specialised Meteorological Centre (ASMC) showed high 7-day average rainfall spreading across the West Philippine Sea-South China Sea-Viet Nam East Sea and the Philippine Sea due to the development of tropical cyclones CHABA and AERE (respectively); southern coast of Myanmar; Nusa Tenggara and Papua of Indonesia. As of reporting, TC CHABA has dissipated in the vicinity of China and TC AERE is within the vicinity of Japan (JTWC).