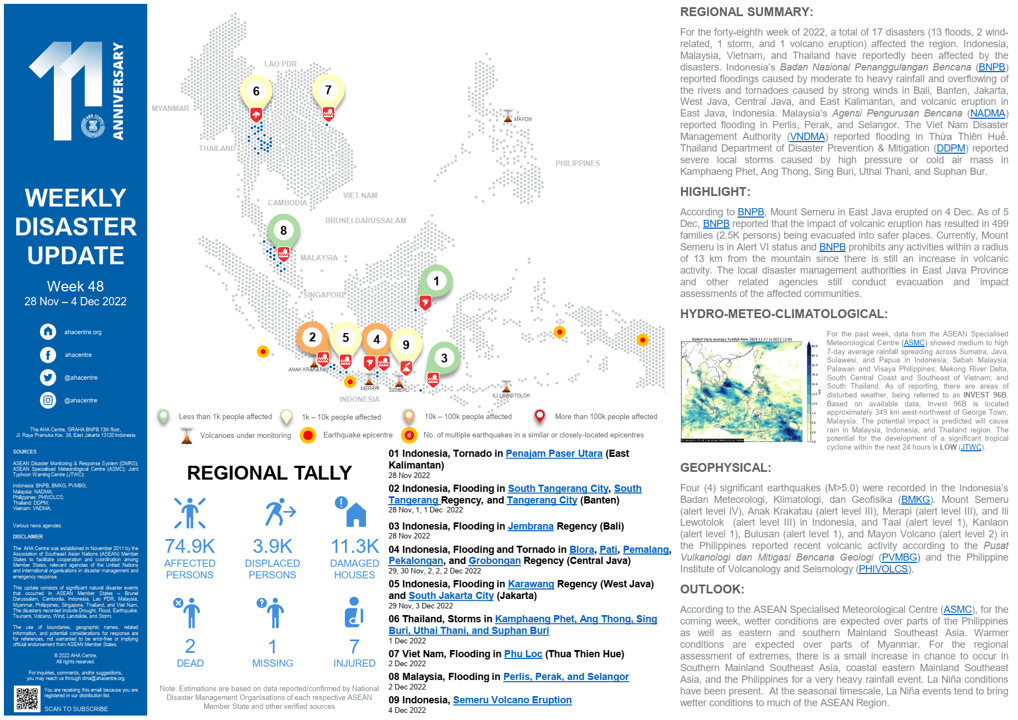 According to BNPB, volcanic activity was recorded on Semeru Volcano starting on 4 Dec. Volcanic ash from hot cloud avalanches was observed to be + 1,500 m above summit (+ 5,176 m above sea level). As of 5 Dec, BNPB reported that the impact of volcanic eruption has resulted in 499 families (2.5K persons) being evacuated into safer places. Currently, Mount Semeru is in Alert Level VI (the highest alert level for volcano in Indonesia). Under Alert Level IV, any activities within a radius of 8 km from the summit of Mount Semeru and 17 km in the southeast direction from the summit are PROHIBITED. The local disaster management authorities in East Java Province and other related agencies still conduct evacuation and impact assessments of the affected communities.

For the past week, data from the ASEAN Specialised Meteorological Centre (ASMC) showed medium to high 7-day average rainfall spreading across Sumatra, Java, Sulawesi, and Papua in Indonesia; Sabah Malaysia; northern Visayas and eastern Mindanao of the Philippines; Mekong River Delta, South Central Coast and Southeast Region of Viet Nam; and South Thailand. As of reporting, an area of convection (INVEST 96B) has persisted approximately 211 km south of Phuket, Thailand. Global model indicate steady development over the next two days as INVEST 96B tracks west-northwestward. The potential for the development of a significant tropical cyclone within the next 24 hours is LOW (JTWC).