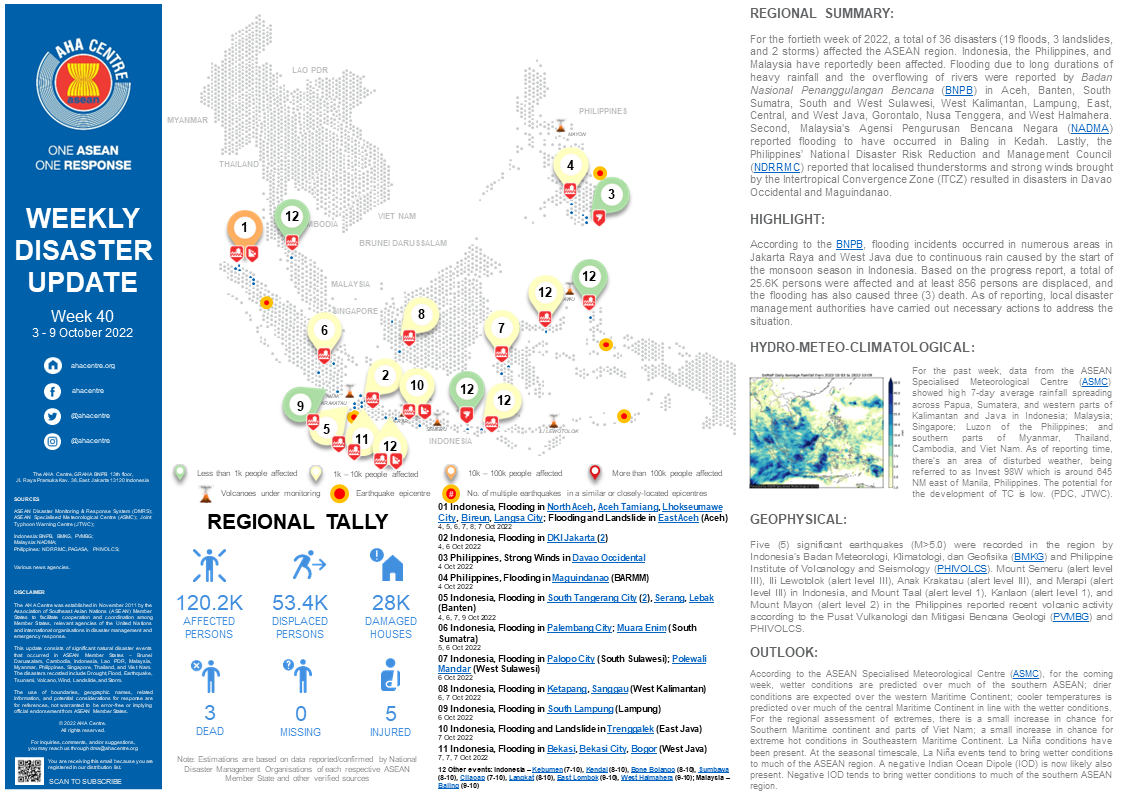 For the fortieth week of 2022, a total of 36 disasters (19 floods, 3 landslides, and 2 storms) affected the ASEAN region. Indonesia, the Philippines, and Malaysia have reportedly been affected. Flooding due to long durations of heavy rainfall and the overflowing of rivers were reported by Badan Nasional Penanggulangan Bencana (BNPB) in Aceh, Banten, South Sumatra, South and West Sulawesi, West Kalimantan, Lampung, East, Central, and West Java, Gorontalo, Nusa Tenggera, and West Halmahera. Second, Malaysia’s Agensi Pengurusan Bencana Negara (NADMA) reported flooding to have occurred in Baling in Kedah. Lastly, the Philippines’ National Disaster Risk Reduction and Management Council (NDRRMC) reported that localised thunderstorms and strong winds brought by the Intertropical Convergence Zone (ITCZ) resulted in disasters in Davao Occidental and Maguindanao.

According to the BNPB, flooding incidents occurred in numerous areas in Jakarta Raya and West Java due to continuous rain caused by the start of the monsoon season in Indonesia. Based on the progress report, a total of 25.6K persons were affected and at least 856 persons are displaced, and the flooding has also caused three (3) death. As of reporting, local disaster management authorities have carried out necessary actions to address the situation.

For the past week, data from the ASEAN Specialised Meteorological Centre (ASMC) showed high 7-day average rainfall spreading across Papua, Sumatera, and western parts of Kalimantan and Java in Indonesia; Malaysia; Singapore; Luzon of the Philippines; and southern parts of Myanmar, Thailand, Cambodia, and Viet Nam. As of reporting time, there’s an area of disturbed weather, being referred to as Invest 98W which is around 645 NM east of Manila, Philippines. The potential for the development of TC is low. (PDC, JTWC).