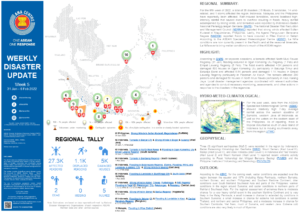 For the fifth week of 2022, a total of 36 disasters (16 floods, 5 landslides, 14 wind-related, and 1 storm) affected the region. Indonesia, Malaysia, and the Philippines have reportedly been affected. Rain-induced landslides, several localised high-intensity rainfall that caused rivers to overflow resulting in floods, heavy rainfall accompanied by strong winds, and tornadoes were reported by Indonesia’s Badan Nasional Penanggulangan Bencana (BNPB). The National Disaster Risk Reduction and Management Council (NDRRMC) reported that strong winds affected Sultan Kudarat in Maguindanao, Philippines. Lastly, the Agensi Pengurusan Benacana Negara (NADMA) reported floods to have occurred in Pitas District in Sabah According to the ASEAN Specialised Meteorological Centre (ASMC), La Niña conditions are now currently present in the Pacific and at the seasonal timescale, La Niña events bring wetter conditions to much of the ASEAN region.

For the past week, data from the ASEAN Specialised Meteorological Centre (ASMC) showed relatively high 7-day average rainfall across the western coastline of Sumatra, western Java of Indonesia as well as the waters on the eastern coast of the Philippines. As of reporting, there is tropical disturbance south of Java Island of Indonesia but is moving southwards away from the region (JTWC).