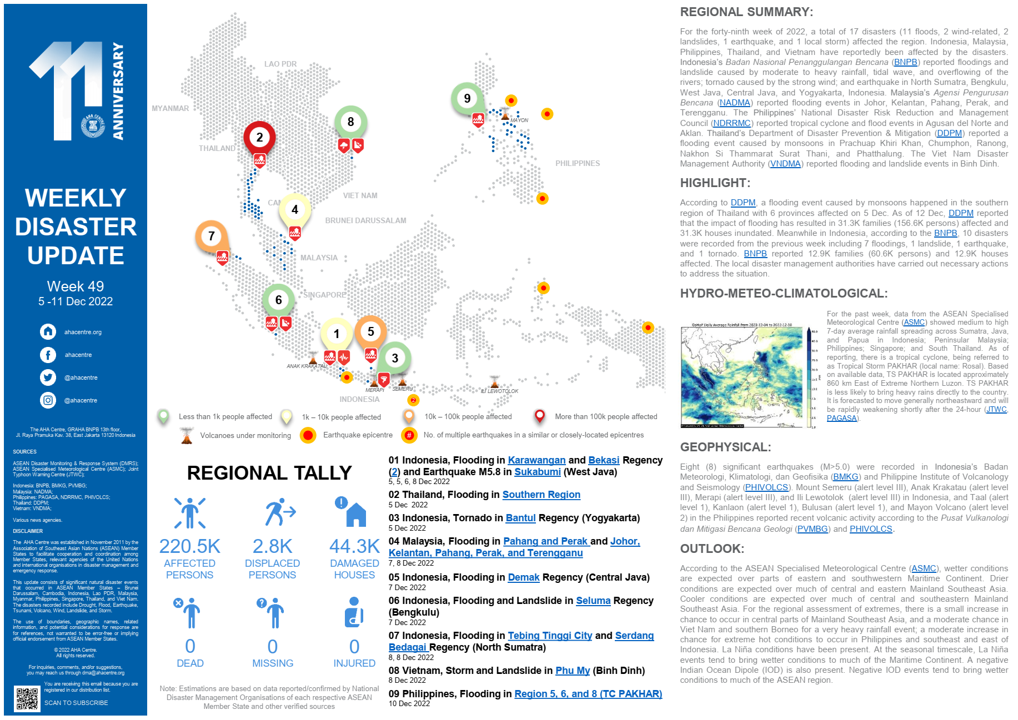 According to DDPM, a flooding event caused by monsoons happened in the southern region of Thailand with 6 provinces affected on 5 Dec. As of 12 Dec, DDPM reported that the impact of flooding has resulted in 31.3K families (156.6K persons) affected and 31.3K houses inundated. Meanwhile in Indonesia, according to the BNPB, 10 disasters were recorded from the previous week including 7 floodings, 1 landslide, 1 earthquake, and 1 tornado. BNPB reported 12.9K families (60.6K persons) and 12.9K houses affected. The local disaster management authorities have carried out necessary actions to address the situation.

For the past week, data from the ASEAN Specialised Meteorological Centre (ASMC) showed medium to high 7-day average rainfall spreading across Sumatra, Java, and Papua in Indonesia; Peninsular Malaysia; Philippines; Singapore; and South Thailand. As of reporting, there is a tropical cyclone, being referred to as Tropical Storm PAKHAR (local name: Rosal). Based on available data, TS PAKHAR is located approximately 860 km East of Extreme Northern Luzon. TS PAKHAR is less likely to bring heavy rains directly to the country. It is forecasted to move generally northeastward and will be rapidly weakening shortly after the 24-hour (JTWC,  PAGASA).