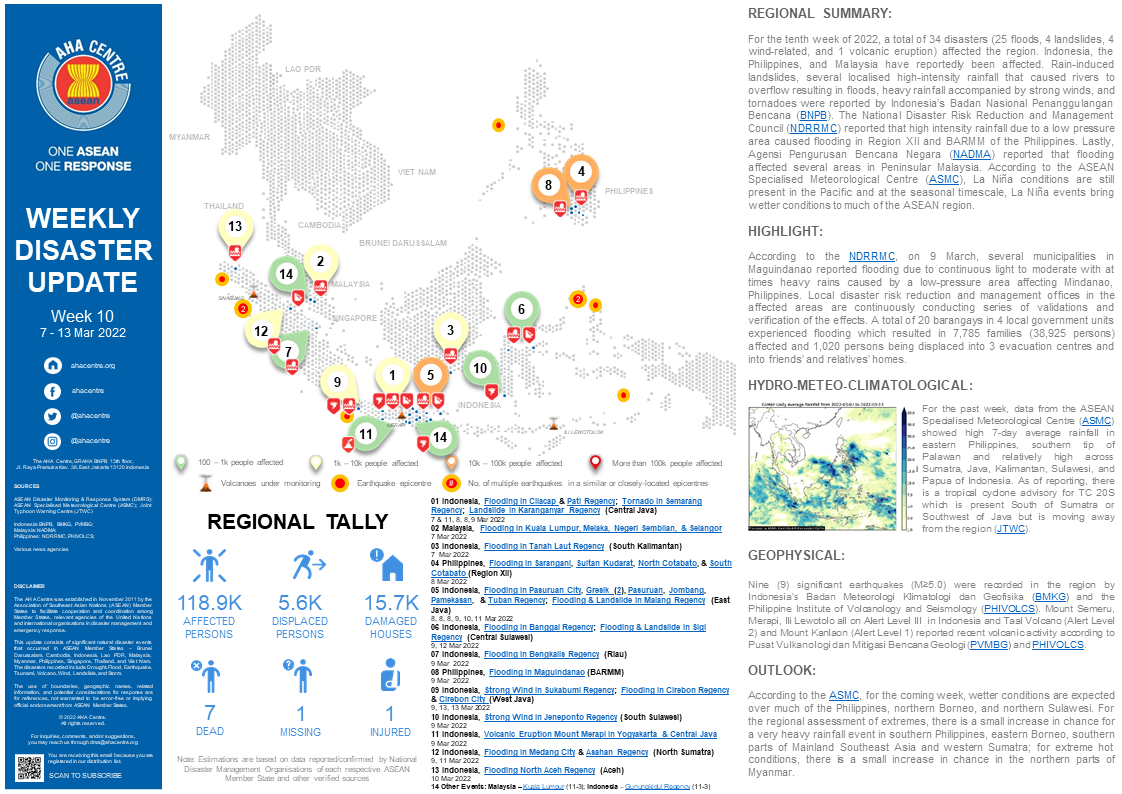 For the tenth week of 2022, a total of 34 disasters (25 floods, 4 landslides, 4 wind-related, and 1 volcanic eruption) affected the region. Indonesia, the Philippines, and Malaysia have reportedly been affected. Rain-induced landslides, several localised high-intensity rainfall that caused rivers to overflow resulting in floods, heavy rainfall accompanied by strong winds, and tornadoes were reported by Indonesia’s Badan Nasional Penanggulangan Bencana (BNPB). The National Disaster Risk Reduction and Management Council (NDRRMC) reported that high intensity rainfall due to a low pressure area caused flooding in Region XII and BARMM of the Philippines. Lastly, Agensi Pengurusan Bencana Negara (NADMA) reported that flooding affected several areas in Peninsular Malaysia. According to the ASEAN Specialised Meteorological Centre (ASMC), La Niña conditions are still present in the Pacific and at the seasonal timescale, La Niña events bring wetter conditions to much of the ASEAN region.

According to the NDRRMC, on 9 March, several municipalities in Maguindanao reported flooding due to continuous light to moderate with at times heavy rains caused by a low-pressure area affecting Mindanao, Philippines. Local disaster risk reduction and management offices in the affected areas are continuously conducting series of validations and verification of the effects. A total of 20 barangays in 4 local government units experienced flooding which resulted in 7,785 families (38,925 persons) affected and 1,020 persons being displaced into 3 evacuation centres and into friends’ and relatives’ homes.

For the past week, data from the ASEAN Specialised Meteorological Centre (ASMC) showed high 7-day average rainfall in eastern Philippines, southern tip of Palawan and relatively high across Sumatra, Java, Kalimantan, Sulawesi, and Papua of Indonesia. As of reporting, there is a tropical cyclone advisory for TC 20S which is present South of Sumatra or Southwest of Java but is moving away from the region (JTWC).

According to the ASMC, for the coming week, wetter conditions are expected over much of the Philippines, northern Borneo, and northern Sulawesi. For the regional assessment of extremes, there is a small increase in chance for a very heavy rainfall event in southern Philippines, eastern Borneo, southern parts of Mainland Southeast Asia and western Sumatra; for extreme hot conditions, there is a small increase in chance in the northern parts of Myanmar.