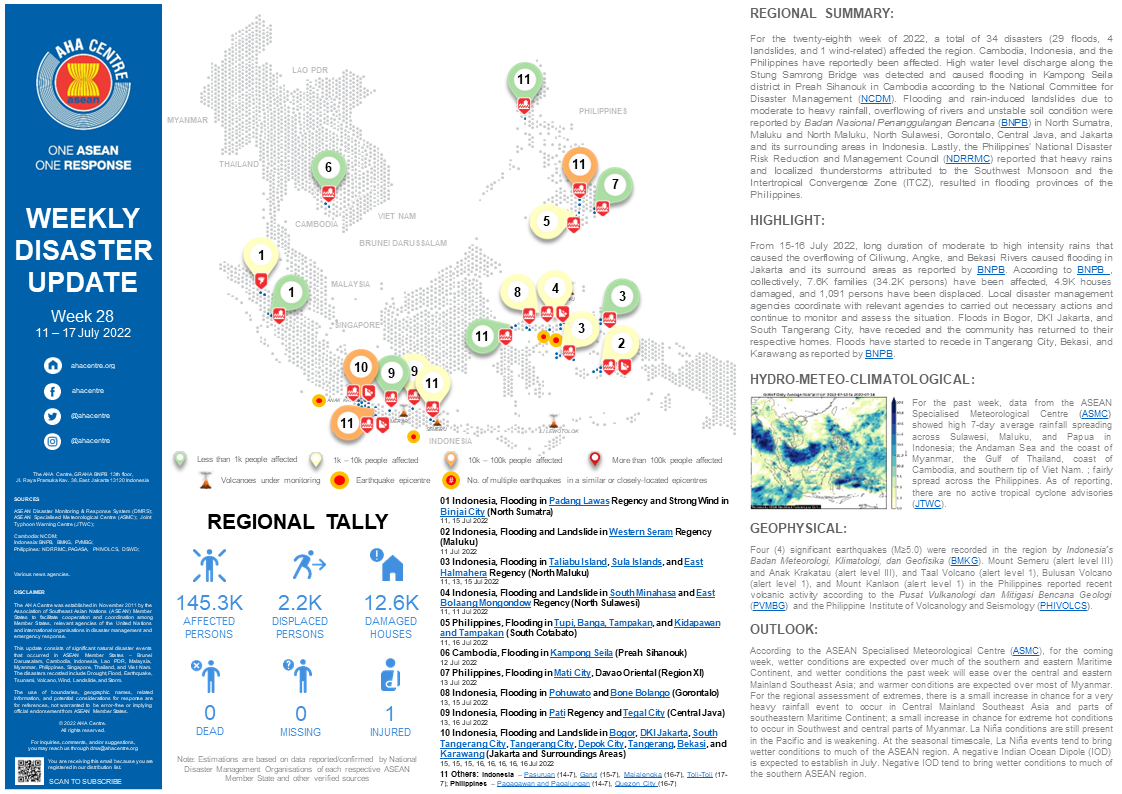 For the twenty-eighth week of 2022, a total of 34 disasters (29 floods, 4 landslides, and 1 wind-related) affected the region. Cambodia, Indonesia, and the Philippines have reportedly been affected. High water level discharge along the Stung Samrong Bridge was detected and caused flooding in Kampong Seila district in Preah Sihanouk in Cambodia according to the National Committee for Disaster Management (NCDM). Flooding and rain-induced landslides due to moderate to heavy rainfall, overflowing of rivers and unstable soil condition were reported by Badan Nasional Penanggulangan Bencana (BNPB) in North Sumatra, Maluku and North Maluku, North Sulawesi, Gorontalo, Central Java, and Jakarta and its surrounding areas in Indonesia. Lastly, the Philippines’ National Disaster Risk Reduction and Management Council (NDRRMC) reported that heavy rains and localized thunderstorms attributed to the Southwest Monsoon and the Intertropical Convergence Zone (ITCZ), resulted in flooding provinces of the Philippines.

From 15-16 July 2022, long duration of moderate to high intensity rains that caused the overflowing of Ciliwung, Angke, and Bekasi Rivers caused flooding in Jakarta and its surround areas as reported by BNPB. According to BNPB , collectively, 7.6K families (34.2K persons) have been affected, 4.9K houses damaged, and 1,091 persons have been displaced. Local disaster management agencies coordinate with relevant agencies to carried out necessary actions and continue to monitor and assess the situation. Floods in Bogor, DKI Jakarta, and South Tangerang City, have receded and the community has returned to their respective homes. Floods have started to recede in Tangerang City, Bekasi, and Karawang as reported by BNPB.

For the past week, data from the ASEAN Specialised Meteorological Centre (ASMC) showed high 7-day average rainfall spreading across Sulawesi, Maluku, and Papua in Indonesia; the Andaman Sea and the coast of Myanmar, the Gulf of Thailand, coast of Cambodia, and southern tip of Viet Nam. ; fairly spread across the Philippines. As of reporting, there are no active tropical cyclone advisories (JTWC).