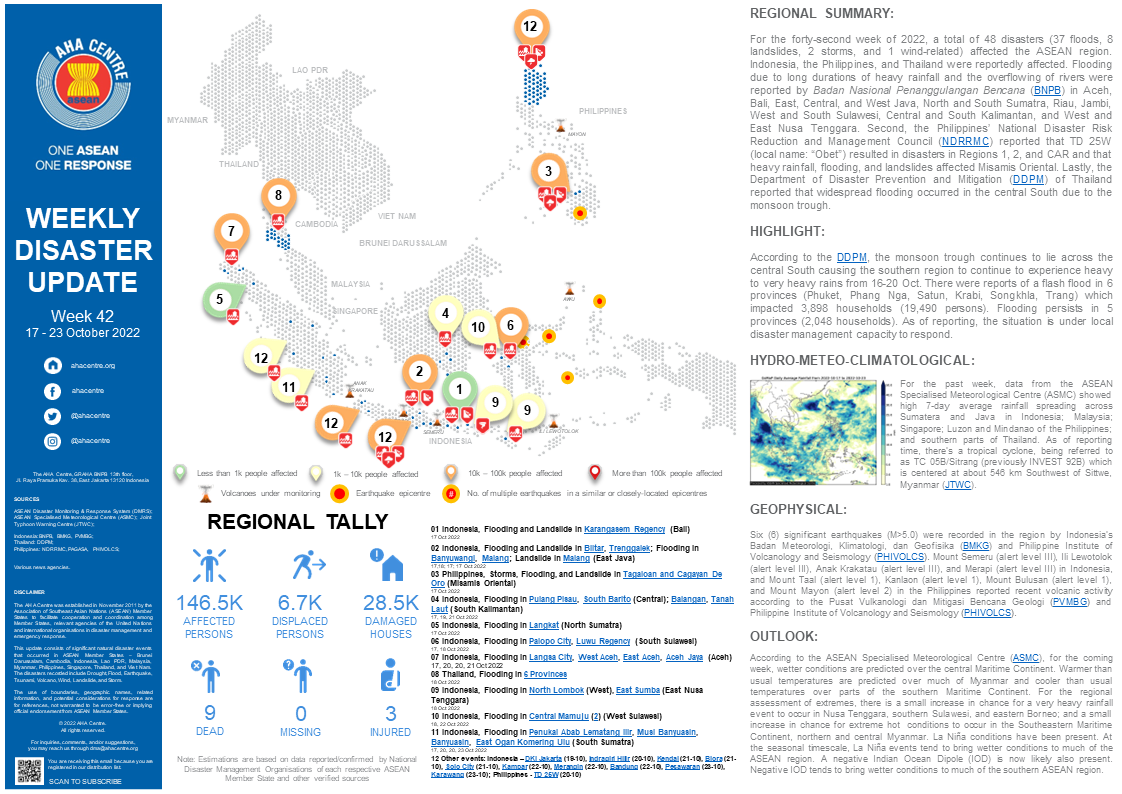 For the forty-second week of 2022, a total of 48 disasters (37 floods, 8 landslides, 2 storms, and 1 wind-related) affected the ASEAN region. Indonesia, the Philippines, and Thailand were reportedly affected. Flooding due to long durations of heavy rainfall and the overflowing of rivers were reported by Badan Nasional Penanggulangan Bencana (BNPB) in Aceh, Bali, East, Central, and West Java, North and South Sumatra, Riau, Jambi, West and South Sulawesi, Central and South Kalimantan, and West and East Nusa Tenggara. Second, the Philippines’ National Disaster Risk Reduction and Management Council (NDRRMC) reported that TD 25W (local name: “Obet”) resulted in disasters in Regions 1, 2, and CAR and that heavy rainfall, flooding, and landslides affected Misamis Oriental. Lastly, the Department of Disaster Prevention and Mitigation (DDPM) of Thailand reported that widespread flooding occurred in the central South due to the monsoon trough.

According to the DDPM, the monsoon trough continues to lie across the central South causing the southern region to continue to experience heavy to very heavy rains from 16-20 Oct. There were reports of a flash flood in 6 provinces (Phuket, Phang Nga, Satun, Krabi, Songkhla, Trang) which impacted 3,898 households (19,490 persons). Flooding persists in 5 provinces (2,048 households). As of reporting, the situation is under local disaster management capacity to respond.

For the past week, data from the ASEAN Specialised Meteorological Centre (ASMC) showed high 7-day average rainfall spreading across Sumatera and Java in Indonesia; Malaysia; Singapore; Luzon and Mindanao of the Philippines; and southern parts of Thailand. As of reporting time, there’s a tropical cyclone, being referred to as TC 05B/Sitrang (previously INVEST 92B) which is centered at about 546 km Southwest of Sittwe, Myanmar (JTWC).

According to the ASEAN Specialised Meteorological Centre (ASMC), for the coming week, wetter conditions are predicted over the central Maritime Continent. Warmer than usual temperatures are predicted over much of Myanmar and cooler than usual temperatures over parts of the southern Maritime Continent. For the regional assessment of extremes, there is a small increase in chance for a very heavy rainfall event to occur in Nusa Tenggara, southern Sulawesi, and eastern Borneo; and a small increase in chance for extreme hot  conditions to occur in the Southeastern Maritime Continent, northern and central Myanmar. La Niña conditions have been present. At the seasonal timescale, La Niña events tend to bring wetter conditions to much of the ASEAN region. A negative Indian Ocean Dipole (IOD) is now likely also present. Negative IOD tends to bring wetter conditions to much of the southern ASEAN region.