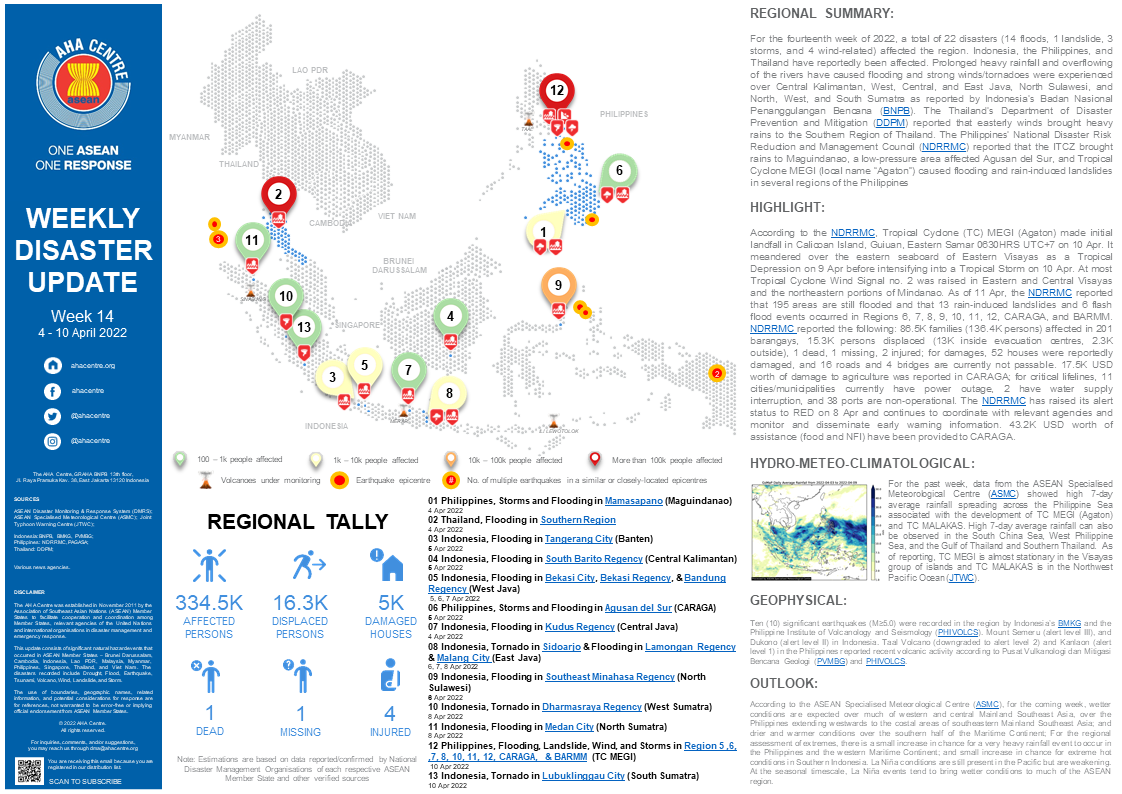 For the fourteenth week of 2022, a total of 22 disasters (14 floods, 1 landslide, 3 storms, and 4 wind-related) affected the region. Indonesia, the Philippines, and Thailand have reportedly been affected. Prolonged heavy rainfall and overflowing of the rivers have caused flooding and strong winds/tornadoes were experienced over Central Kalimantan, West, Central, and East Java, North Sulawesi, and North, West, and South Sumatra as reported by Indonesia’s Badan Nasional Penanggulangan Bencana (BNPB). The Thailand’s Department of Disaster Prevention and Mitigation (DDPM) reported that easterly winds brought heavy rains to the Southern Region of Thailand. The Philippines’ National Disaster Risk Reduction and Management Council (NDRRMC) reported that the ITCZ brought rains to Maguindanao, a low-pressure area affected Agusan del Sur, and Tropical Cyclone MEGI (local name “Agaton”) caused flooding and rain-induced landslides in several regions of the Philippines.

According to the NDRRMC, Tropical Cyclone (TC) MEGI (Agaton) made initial landfall in Calicoan Island, Guiuan, Eastern Samar 0630HRS UTC+7 on 10 Apr. It meandered over the eastern seaboard of Eastern Visayas as a Tropical Depression on 9 Apr before intensifying into a Tropical Storm on 10 Apr. At most Tropical Cyclone Wind Signal no. 2 was raised in Eastern and Central Visayas and the northeastern portions of Mindanao. As of 11 Apr, the NDRRMC reported that 195 areas are still flooded and that 13 rain-induced landslides and 6 flash flood events occurred in Regions 6, 7, 8, 9, 10, 11, 12, CARAGA, and BARMM. NDRRMC reported the following: 86.5K families (136.4K persons) affected in 201 barangays, 15.3K persons displaced (13K inside evacuation centres, 2.3K outside), 1 dead, 1 missing, 2 injured; for damages, 52 houses were reportedly damaged, and 16 roads and 4 bridges are currently not passable. 17.5K USD worth of damage to agriculture was reported in CARAGA; for critical lifelines, 11 cities/municipalities currently have power outage, 2 have water supply interruption, and 38 ports are non-operational. The NDRRMC has raised its alert status to RED on 8 Apr and continues to coordinate with relevant agencies and monitor and disseminate early warning information. 43.2K USD worth of assistance (food and NFI) have been provided to CARAGA.

For the past week, data from the ASEAN Specialised Meteorological Centre (ASMC) showed high 7-day average rainfall spreading across the Philippine Sea associated with the development of TC MEGI (Agaton) and TC MALAKAS. High 7-day average rainfall can also be observed in the South China Sea, West Philippine Sea, and the Gulf of Thailand and Southern Thailand.  As of reporting, TC MEGI is almost stationary in the Visayas group of islands and TC MALAKAS is in the Northwest Pacific Ocean (JTWC).

According to the ASEAN Specialised Meteorological Centre (ASMC), for the coming week, wetter conditions are expected over much of western and central Mainland Southeast Asia, over the Philippines extending westwards to the costal areas of southeastern Mainland Southeast Asia; and drier and warmer conditions over the southern half of the Maritime Continent; For the regional assessment of extremes, there is a small increase in chance for a very heavy rainfall event to occur in the Philippines and the western Maritime Continent; and small increase in chance for extreme hot conditions in Southern Indonesia. La Niña conditions are still present in the Pacific but are weakening. At the seasonal timescale, La Niña events tend to bring wetter conditions to much of the ASEAN region.